Bomb Cyclone is No Match for the Colorado/Wyoming Chapter

The “Pi Day” theme of the annual workshop gave Angela Folkestad, Jamie Johnson and Emma Dolan the opportunity to add some humor to the day-long event, but as the day of the workshop drew closer, talk of a large-scale snowstorm moving across the region proved to be no laughing matter.

“My first thought was, ‘will it really happen?’ But, there was no way I was going to cancel just because of a snowstorm,” Angela says.  “People in Colorado know how to get around in snow, especially people in the construction industry.”  After all, big trucks and four-wheel drive vehicles are common, she adds.

As the storm approached, calls started coming in from speakers, who said their flight plans (including double- and triple-booked alternative flights) were being canceled.  Eventually, all but two out-of-state participants were grounded at home or at intermediate connection points.

That’s when Angela reached out to ACPA staff, and Jerry Voigt (one of the grounded speakers), Andy Gieraltowski, and Bill Davenport to put a plan into action.  With support from ACPA and the CP Tech Center, all the “remote” speakers were able to participate through live web-based broadcasting programs.  “I was very relieved to have ACPA helping out throughout the day,” Angela adds.

By the morning of the event, the bomb cyclone had dumped 5 to 20 inches of snow throughout the state, delivered winds gusting up to 80 mph, and dropped the  barometric pressures to historically low levels, according to 9News.com.

Angela praised Melody Perkins of the Colorado DOT, who was stuck in the storm on her way home the night before.  After spending most of the night trying to get home, and then after only an hour of sleep, she presented at the workshop. Angela recognized Colorado DOT Chief Engineer Joshua Laipply for presenting at the workshop, in spite of the severe weather.  It’s also worth mentioning Colorado DOT materials engineers from around the state spent most of the day before the workshop meeting in a dark conference room after the power went out in their building.  “They didn’t want to miss their opportunity to meet while the whole group was in town,” she says.

Angela also commended the remote speakers for delivering presentations seamlessly and complimented presenters and moderators who were at the conference, noting their flexibility in adapting to time changes and jumping in where needed.

The use of the “webinar” program to link the remote speakers wasn’t the only technology put to use during the workshop.  Two undergrads studying with Dr. Tyler Ley at Oklahoma State University, were able to attend, thanks to their arrival earlier in the week. Emily Rideout and Hailey Goodale, participated in the program and assisted with the Q&A following the presentations. They used a toll-free number where participants could text questions, a technology that led to a very robust exchange of questions and responses. “About half of the questions came through the texting program,” Angela says.

Although the conference fell a little short of the anticipated attendance, Angela said there were more than 225 attendees.  “To have more than two-thirds of our expected attendance is really amazing,” she says, adding, “A few people were not able to attend because roads were closed in Wyoming and south of Denver.”

Throughout the day, this writer observed that Angela, Jamie, and Emma, exhibited tremendous grace under pressure.  The workshop delivered a wealth of technical information, program updates, and some hospitality and networking events, along with the Chapter’s paving awards program.  Along the way, there were plenty of “Pi” jokes, which underscored the humor and forethought that went into the workshop.  In the end, the workshop also showed that ACPA members, national and chapter staff, agency customers, and others excel through even the harshest conditions. 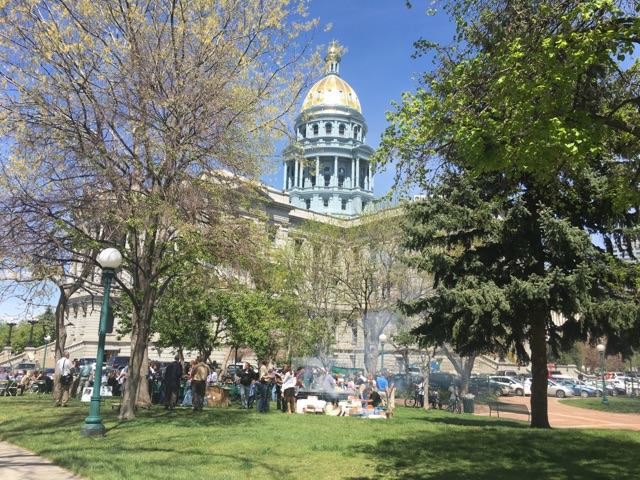 You are invited to attend the 2019 Concrete Day at the Capitol BBQ on Tuesday, April 23!
The event takes place at the southeast corner of the Capitol grounds (corner of 14th and Grant)

Lunch will be served from 11:00am – 1:30pm
Governor Polis will be in attendance to recognize the concrete industry as important to furthering development in our state and the hard work, dedication, and the efficiency of its employees.


We are seeking volunteers!
Please contact Emma if you or your staff are available and willing to help. If you can join us, please indicate your time and volunteer category preference from the following list:

Register today for the Everyday Counts Pavement Preservation Workshop in conjunction with the 2019 National Concrete Consortium in Denver.

If you have questions, please contact:
Angela Folkestad (AFolkestad@pavement.com) or
Jamie Johnson (JJohnson@pavement.com)

Mark your calendar for Thursday, March 14, 2019 and join us for a day of education and discussion on all things concrete pavement!

The workshop will feature presentations by industry experts from all over the nation speaking about topics that impact the local concrete pavement industry. Individuals can attend these presentations to learn and discuss challenges and advancements in concrete paving.

If you are interested in sponsoring or exhibiting at the 2019 Concrete Pavement Workshop you can do so using the registration link above. If you have any questions please contact Emma Dolan.

The Excellence in Concrete Pavement Awards will also be presented.

If you have any questions please contact Emma Dolan at edolan@pavement.com or 720-297-9902.